Let’s hear it for the women, huh? We always put so much focus on the men in beer pong that the fairer sex often gets overlooked, unfairly. All of us want the sport to grow, but for some reason one of the biggest avenues for growth, namely getting more girls in the game, is underdeveloped. There are, however, some exceptions.

This year’s Return to Mesquite, put on by BPong, had an extremely high ratio of coed to all-guy teams. Part of the reason for this was a new incentive the BPong guys were trying out. Both the highest placing coed team and all-girl team won bids to World Series VII. The California girls of Candy is Dandy, But Liquor is Quicker (Katie Harris and Jennifer Conant) took the prize for best all-girl team. Laura Olson of the SoCal coed team Nolan and Some Girl went the furthest of any female player, tying for 25th and being the only girl to make the final bracket.

“I remember at the SoCal Open in 2009 there was only like 10 girls playing out of about 150, we were a small minority. I hope more females will start joining and keep it growing. I think the best way to do this is just what B/S/and D are doing. Keep events like the coed to give the ladies an opportunity to be a champion. Opportunities like Mesquite that gave a bid to the best girl/girl team and best guy/girl team. Without opportunities like that, a lot of the top girls would just have to keep paying year after year and we need to be rewarded for our skill too. I am thrilled that I finally get to go for free this year, even though I would of course pay for the fun I have those 5 days.” – Olson
The BPong sponsored East Coast Beer Pong Championships also used a prize structure which awarded the deepest all-girl and coed teams a cash prize. Unfortunately not a single all-girl team entered the field, which is a travesty. Christina Schmitt and Grant Pettrone took the coed prize.

“I was more excited that I finished 9th in that tourney, one spot away from the money!” – Schmitt

Earlier in the year, another record number of female players descended on Phoenix, AZ for the annual Best of the West tournament. This was almost entirely the result of the organizers’ decision to run a female only Best-of tournament. Six squads of six girls each competed, with squads from NorCal, SoCal, Phoenix, Albuquerque, and Las Vegas. In the end the home field proved advantageous for the two AZ squads, as they faced each other in the finals. Lauren Braley’s squad came out ahead.

“Playing in a girls tournament is always a lot of fun and it’s always great to win, but it’s always a little sweeter victory when you beat the boys. Hopefully at WS VII we will see a lot more girls playing at a higher competitive level.” – Braley
More recently, the first ever all-girl satellite took place in California at the West Coast Championships. Favorites going into the tournament were Teddie Mendibles (2nd place WSOBP VI Women’s Singles) / Rachel Lopez (who knocked this writer and his wife out of the WSOBP VI Coed tournament), Ariel Albright (1st place WSOBP VI Women’s Singles) / Malarie Mendez, and Lauren Braley (known as the Top 25 killer for defeating several of a certain site’s top 25 male players) / Justine Huff (taught to shoot the Top 25 way). In the end We Love Butt Sex (Justine Huff and Lauren Braley) defeated 99 Problems but a Bitch Ain’t One (Katie Harris and Lindsey W.) in a surprising finals match up where Lauren/Justine were forced to “double dip” Katie/Lindsey. Down both games early by 4 and 5 cups, Lauren/Justine showed what it takes to win any game once the pivotal six/three racks are reached by cleaning house and winning with a collective seven cup differential. 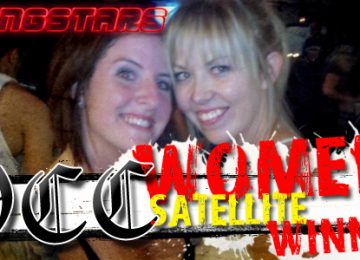 “For the weeks, days, and hours leading up to the satty, I was so excited because of how deeply I wanted this win; all of AZ will tell you. The win was more gratifying because I participated and competed more than I had anticipated. Knowing that I won that tournament because I played my heart out is a phenomenal feeling. Now that I am deeper into the scene, I see how few females there are. Although it may be true that guys are better, I believe it is because girls don’t take it as serious. There is no better feeling than being underestimated and winning against guys who think I’m nothing but talk. Whether its beating my best friend on a 9 ft table or going 9/10 in a tournament against two guys, I step up to a table ready to play. I would like more women to have that feeling, because it’s addicting and makes you realize why you play. Take the chance and play, you might surprise yourself. That’s how I started. And with practice, there is nowhere to go but up, passing plenty of guys along the way – Huff
The majors are doing their best to promote female participation as well, with coed and women’s singles events at both the World Series of Beer Pong in Las Vegas, NV and the World Pong Tour Championship in Atlantic City, NJ.

In Vegas, amidst the confusion that was the men’s singles, the women’s singles was being held almost unnoticed by all the other players in the room. Of course the ladies in attendance knew very well what was going on, and what was at stake. Ariel Albright eventually won that endurance test of a tournament, against SoCal’s Teddie Mendibles. The verbal abuse between the two girls during the game was epic, as was the shooting.

“I went into the tournament with one thing on my mind and that was, ‘you got this!’ For every upcoming game during the tournament I felt I wanted to challenge myself and be as consistent, if not better, than the previous game…At the time, not knowing who Ariel Albright was or how she played helped me to stay focused. The rush of excitement and determination kicked in! In all pongers’ minds they’re only thinking of one thing, winning! It got intense when everyone thought the game was over when Ariel hit last cup and I had one chance to rebuttal. I took a breath and heard a friend say, ‘Settle down, Teddie.’ I made the rebuttal shot but didn’t win the game. I was still very pleased with my performance.” – Mendibles

“Winning the ladies singles was indescribable. Most people who are not regular full time degenerates, like us serious pong players, don’t think that girls can play pong, and so I am way stoked to have had bragging rights for the entire year! When I tell people I won a Series event in Beer Pong, they don’t really believe me until we play a heads up game…. So much fun! I can’t wait until next year.” – Albright

The following night, O’Shea’s played host to the coed side event which Laura Olson and Mark Pimentel took down.

“I love playing with Mark because there is no pressure, because we play like we don’t care even though we do want to win like everyone else. I knew [we] would do well because ever since we started playing together we have never lost. I knew we had it in the bag when we beat Pops and Shelley Balls and she dropped to her knees and I’m pretty sure shed a tear. I think that was the highlight too because I don’t take it that serious.” – Olson
Back in the East Coast last summer, the WPT’s Atlantic City Championships hosted a women’s singles as well as a coed side event. Though the overall event saw a lower turnout than years past, there was still a lot of top female talent in attendance. The coed tournament finals saw Connie Fowler and Brandon Marx facing Shelley James and Mike Popielarski, which the East Coast powerhouses took down. It was a much needed win for Shelley and Pop after their loss in the Vegas coed tournament.

“When a coed team like Pop and I don’t even make it to the semi-finals, people have a lot to say. So the win in AC felt great! I would absolutely love to see more females getting involved in the game. Sure, just like most competitive sports, guys seem to play a bit better than the females, but that doesn’t mean females should bow out! Get in there, play the game, and show these boys watcha got! Nothing is more entertaining to me than to walk up to a table, see my male opponents start smiling and getting all excited about ‘playing a girl and an easy win.’ Nothing is more satisfying than proving them completely wrong and watching them walk away stunned and disappointed.” – James
Christina Schmitt won the talent-heavy women’s singles.

“I was so ponged out by the end of the tourney that I didn’t care if I won or not, but Kessler came hobbling over on his crutches and said, ‘Schmitt are you really going to let this girl win?’ I said I guess not, and finished the game. It was his motivation that made me actually care about taking first place.” – Schmitt

Of course no article about the women of beer pong would be complete without a nod to the one who can be credited with first breaking that glass ceiling in the pong world. Of course I’m talking about the one and only Kerrie Rusch, who carried her husband Peter to 9th place at World Series II, then went on to take him to 25th and 17th the following two years.

“The male/female comparison was always weird for me because the goal was simply to be good and win. While it was flattering, it was also disappointing to hear, ‘That team is pretty good…and it has a girl on it.’ In the earlier days of beer pong there weren’t a lot of female players. Now, I think girls’ interest in playing has grown so we’re seeing them go further in the competition, which is awesome. We are still far outnumbered by guys, and there are still pretty low expectations of female players, but I do think girls are starting to get a little credit where credit is due. When I hear people talking about female players now, I feel like I hear more ‘damn she’s good’ and less ‘she’s pretty good…for a girl.’” – Rusch
With more and more women playing in the big ones, and all of them fed up taking crap from their male counterparts, it’s only a matter of time until we’re all at home watching the YouTube finals of the first female player to take the big check. Get ready for it, fellas.
– Clawless