David Feichter is a rare species that most sports are rarely ever privileged with witnessing.  Not only is he the most decorated European Professional Beer Pong player of all time but he’s also one of the most humble.  Down to his core he just loves to play the game like so many of us die hards and OG’s here in the United States.  The scariest part, he’s only 23 but he’s also been playing professionally for the last six years.  Back home their legal drinking age is 18 so he’s benefited greatly through tournament experience at such a young age.

This young man’s resume is quite impressive and only rivals a few of the greatest here in the states.  He has a total of 10 final table appearances across Europe’s four biggest events; ASOBP, GSOBP, SSOBP & ESOBP.  He’s now earned himself a final table in the United States with taking down this year’s Splash at the Shore $10k in Atlantic City earlier this year with first time partner, Marcel Hasler.

We can’t truly begin to understand his dominance without breaking down these 10 final table appearances.  For two of these events, The Swiss Series of Beer Pong and the Austrian Series of Beer Pong, Dave and his longtime friend and partner Man Senfter were able to do something so many champions can’t; Defend their title!  In 2015-2016, Die Bierathleten were able to claim back-to-back titles at their hometown event, The ASOBP.

Then a couple years later we visit the SSOBP where they’ve won the last two titles and will have the opportunity to claim the coveted 3Peat this September when the 10th Annual Swiss Series of Beer Pong takes place.  Rounding out the rest of their appearances at these two events include a 2nd place finish at the ASOBP as well as a 2nd and 3rd in the SSOBP.

Moving on, Dave was able to lead him and Manu to two more final tables at the German Series of Beer Pong that which resulted in a 1st place and 2nd place finish.  As for the European Series of Beer Pong, Die Bierathleten has claimed two more titles there in 2014 and 2017.  Check out our complete archive of every International Major tournament over at Beer Pong Champions. 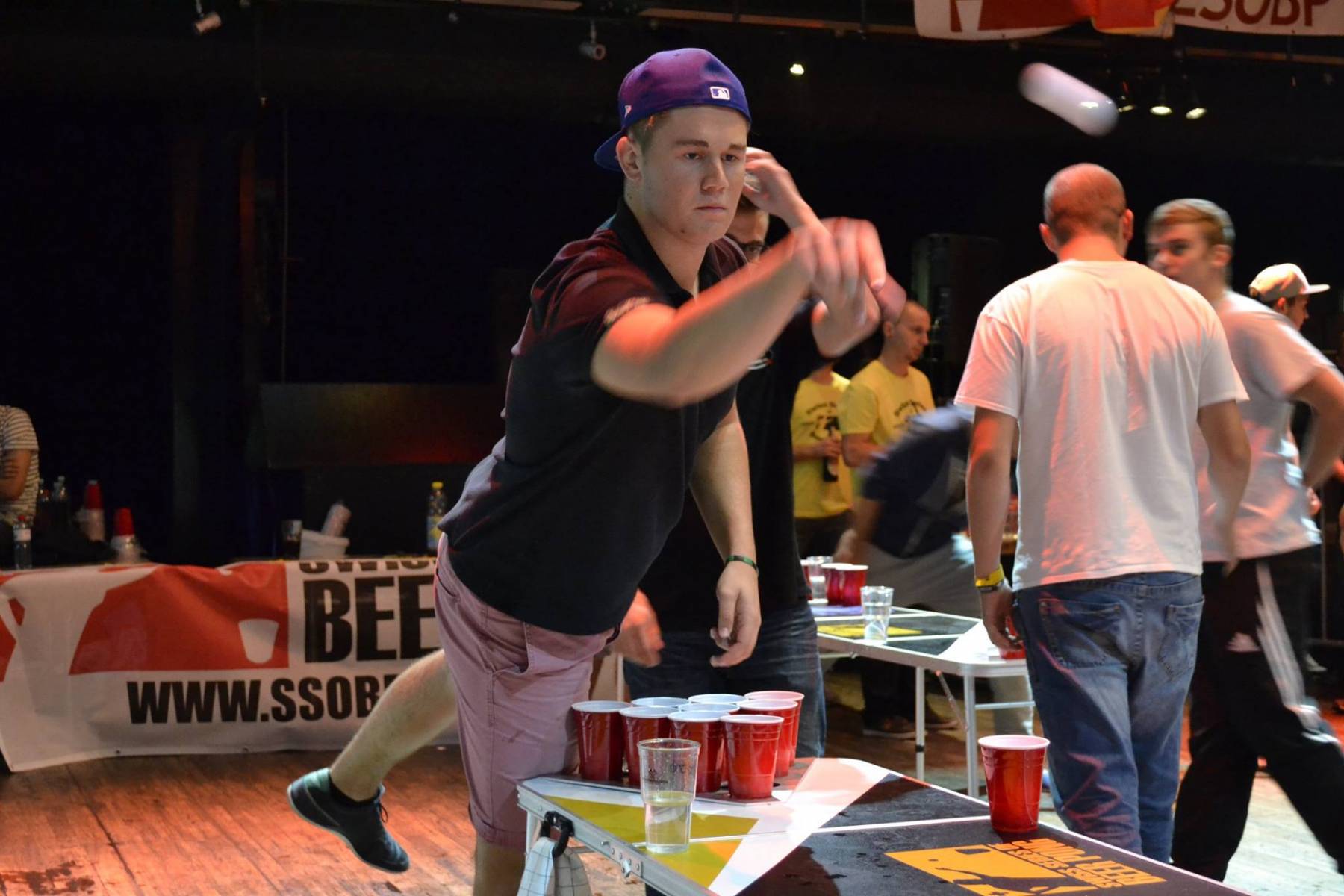 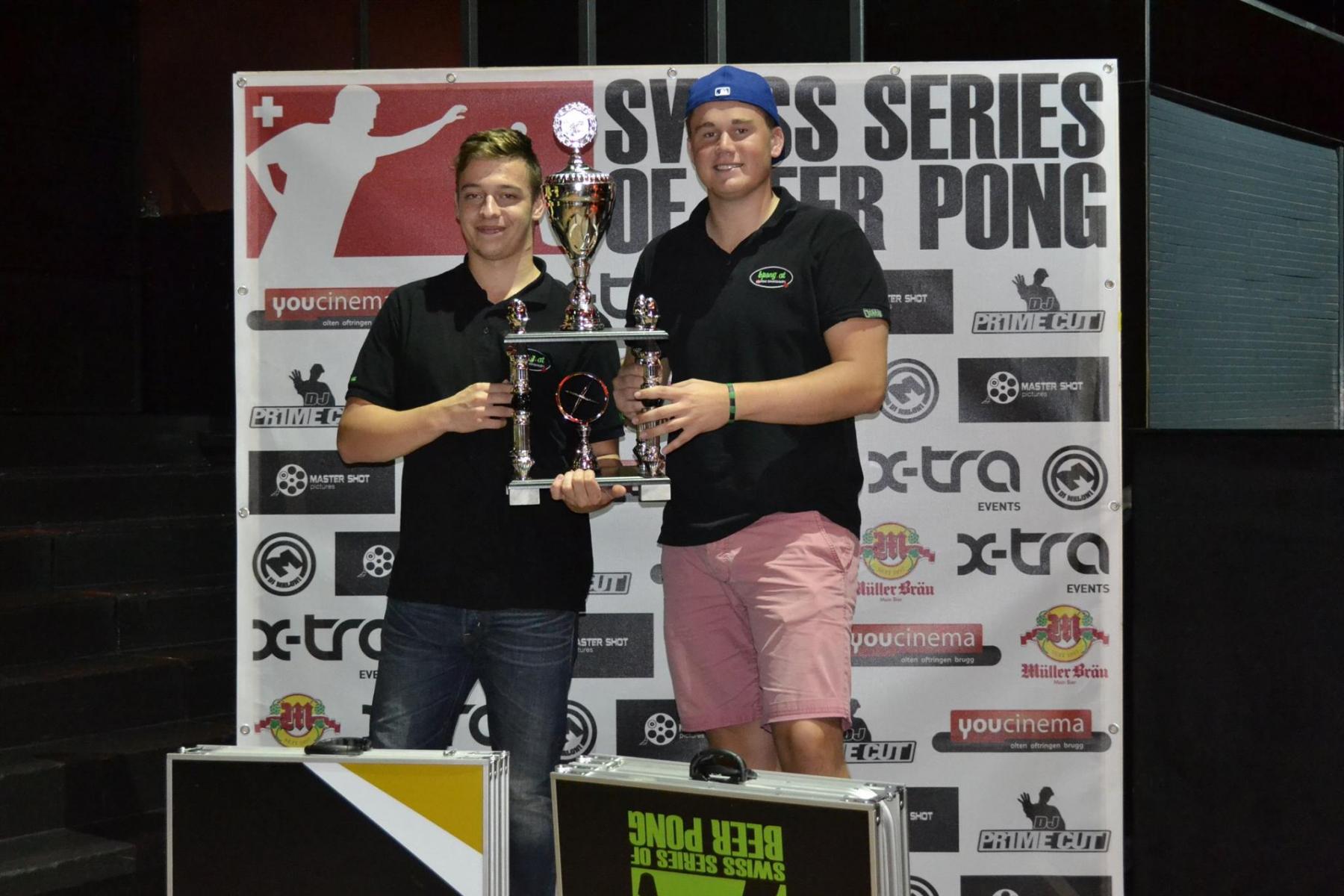 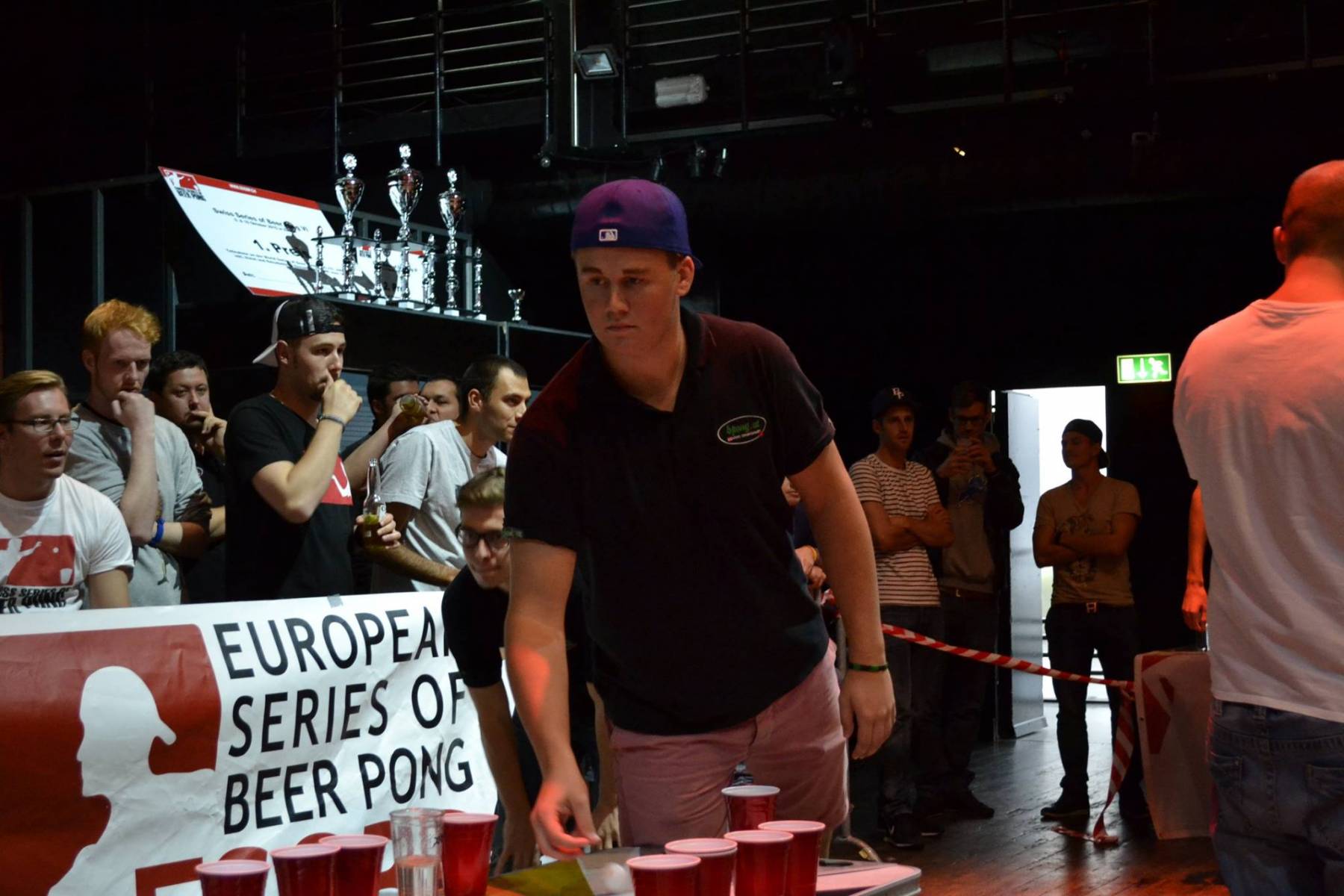 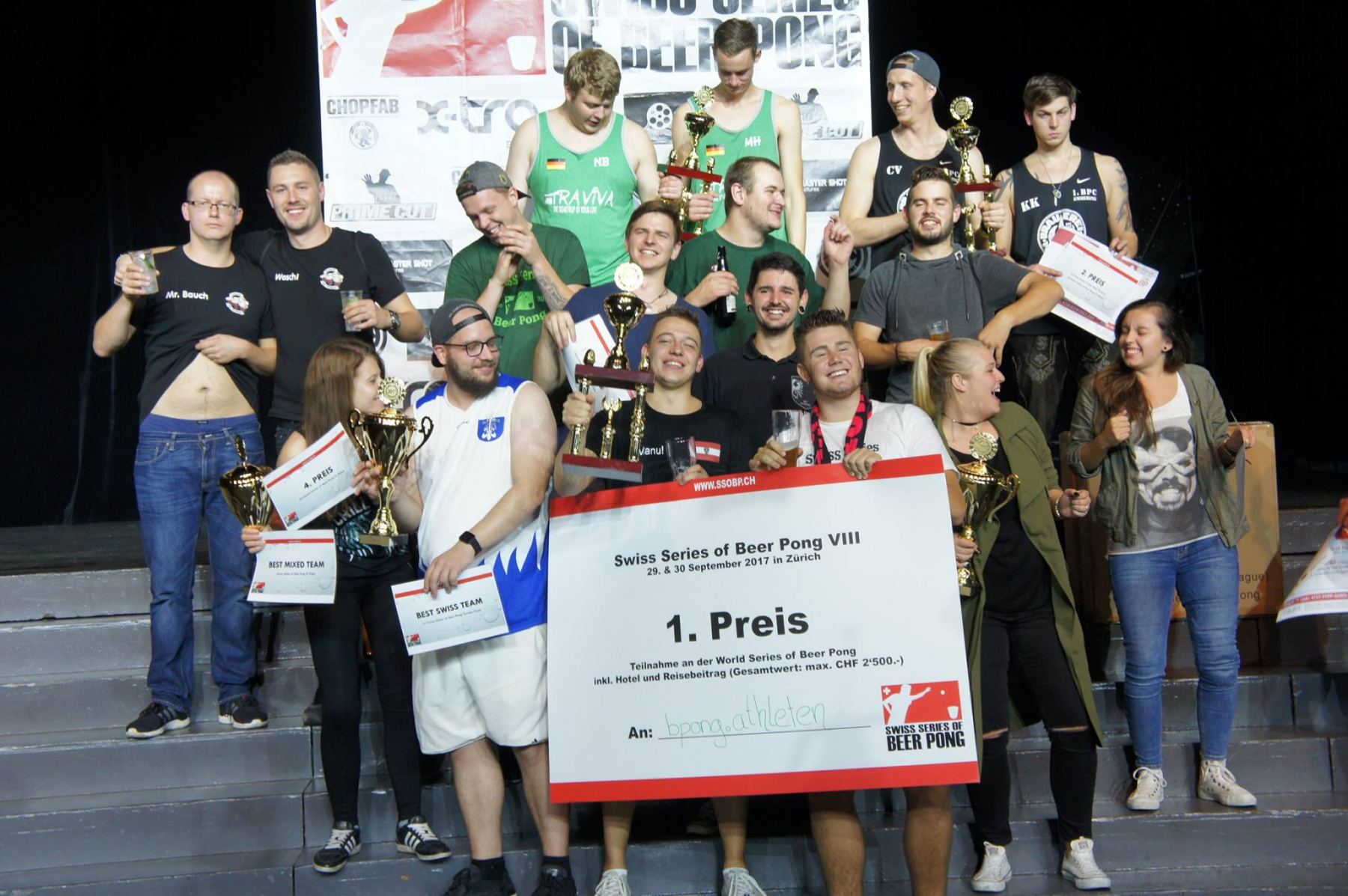 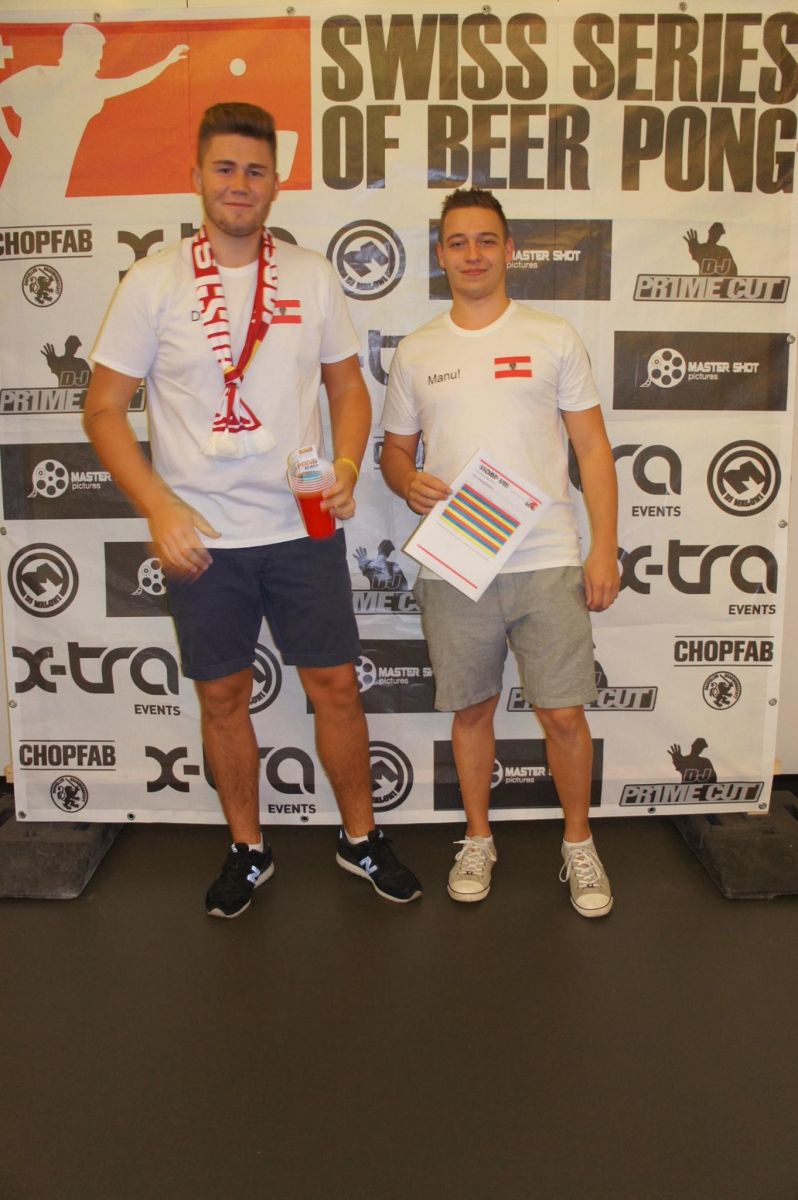 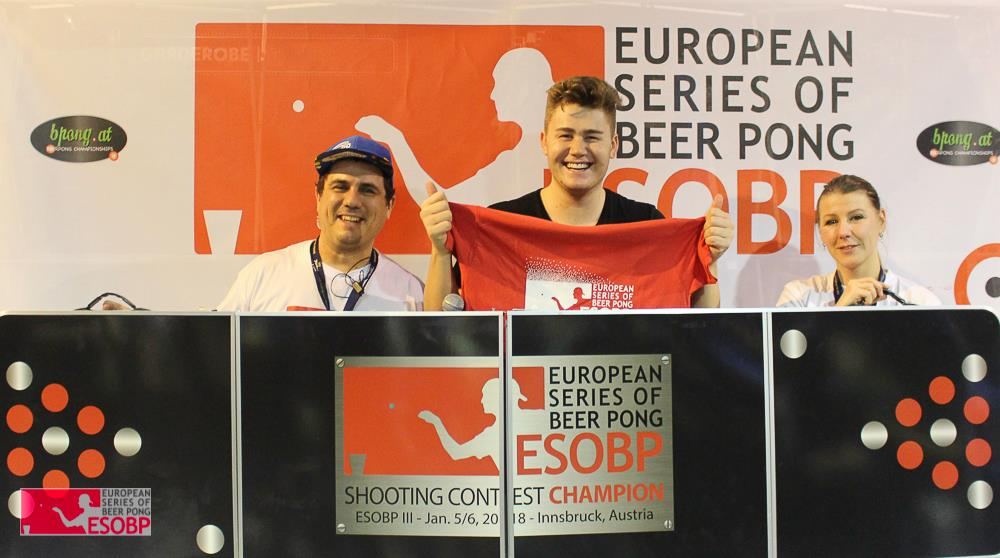 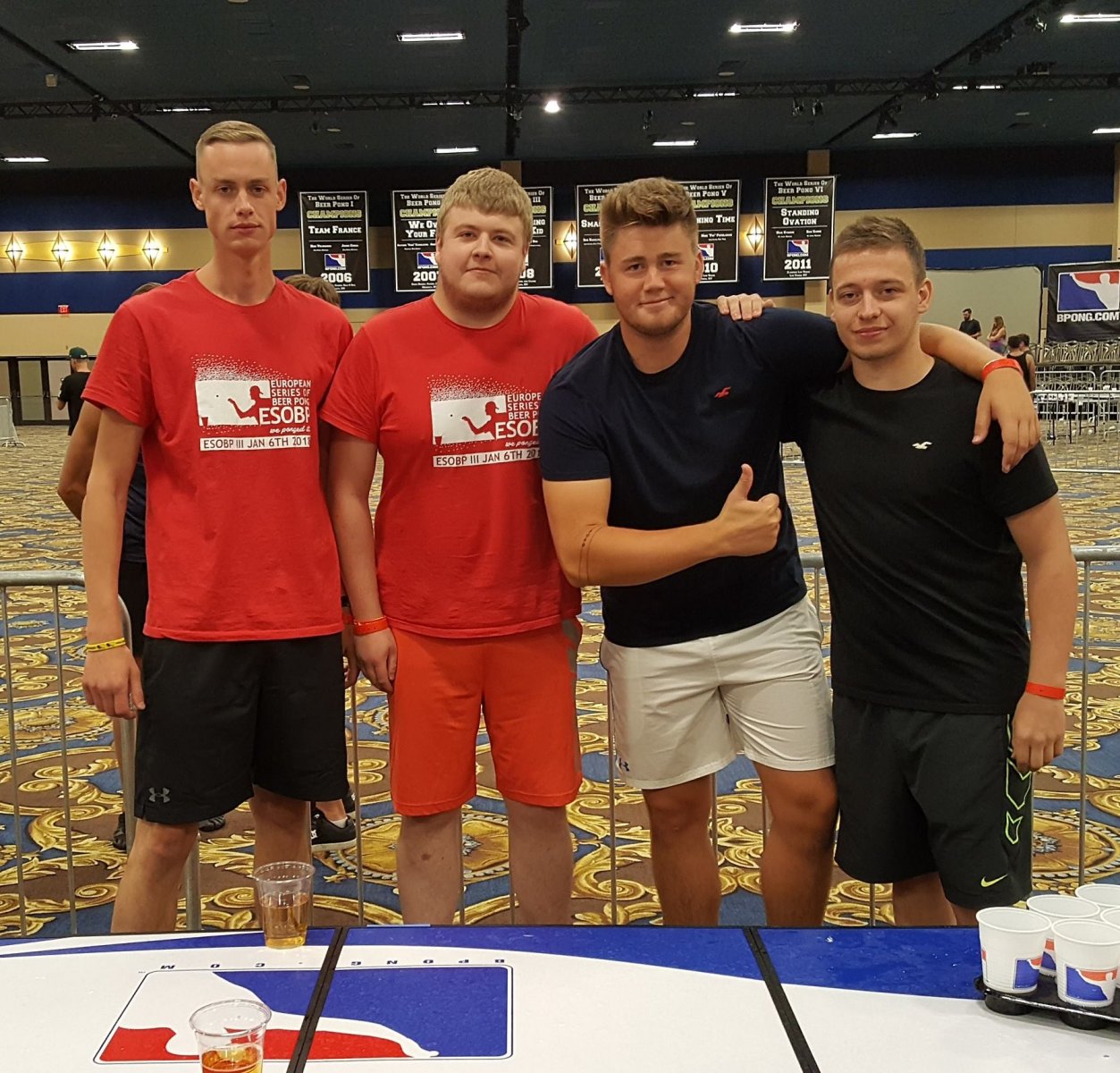 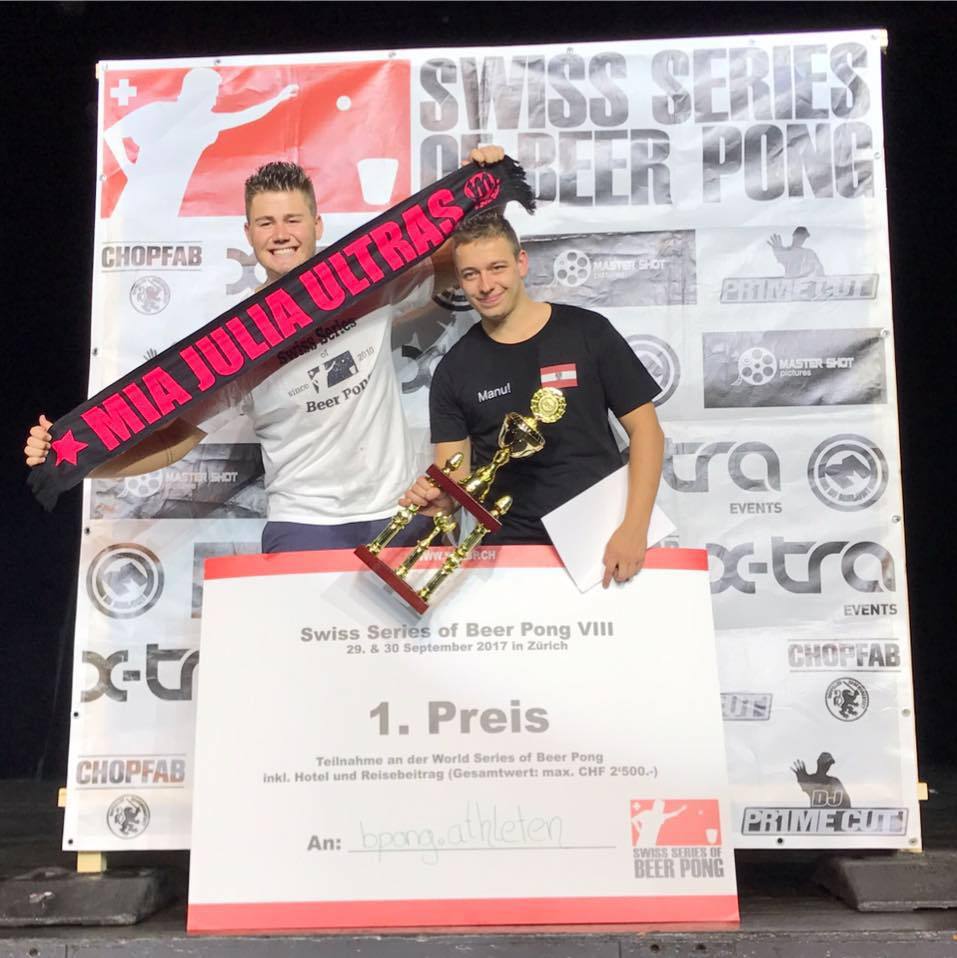 Get to know David Feichter

We had the opportunity to sit down with Dave and ask him a series of questions that cover his entire career as a professional beer pong player in hopes of finding out some things we normally wouldn’t know.  Below are a few of them, representing Pongstars as PS and David Feichter as DF.

Pongstars: You’ve been playing for quite some time now, what was your first experience playing in the world you know and dominate today?

David Feichter: It was in March of 2013.  Manu and I went out one night and played in a local weekly tournament where we lost every single game we played.  From there we had local company called “Beerpong Elite” where the tournaments would get larger one by one which lead to us finally winning our first big tournament for a trip to Vegas at the Austrian Series of Beer Pong in 2015

PS: Losing every single game is quite demoralizing.  Most people would just walk away at the point and try something new.  Clearly you did not so at what point did you realize how good you guys had become?

DF: Yeah, we weren’t always as good as we are today but I always tried to move forward to get better.  In my opinion, it was GSOBP  in 2014 when we lost in the finals to “Twin Towers” from our hometown.  Even though we lost it’s always a good feeling knowing you competed with the best.

PS: Alright, rapid fire time!  I have three questions for you, 1) Can you play sober? 2) Have you ever let someone pay for you to play with them? 3) What is your most memorable game to date?

DF: Playing sober?  I would say yes since that’s how I played during my first years competing.  Taking payment to play with someone, No!  This really isn’t a thing in Europe and I don’t think it will ever happen.  If I had to pick just one game, it would be the bracket finals of WSOBP XIII; we had to double dip our opponents who I’m unsure what their team name was.  After a perfect first game and a solid start into game two, we started thinking about the top 16 and if we were really able to make that big step.  Multiple overtimes later and a very lucky last cup brought us there – in a dubious way!

PS: Alright, Dave!  You’ve been playing long enough now where like any other pro in any other sport, you’ve probably had your battle with different shots and form.  Can you tell us a little bit about this?

DF: Well, I’ve had a total of three different shots over my career.  I started with both feet on the floor.  Then as we progressed I started leaning a lot more but it was a strange lean before I shot.  The form I have now is pretty casual and I have no plans of changing it in the future apart from minor details

PS: Interesting!  A player of your caliber must get asked to play all the time and I’m sure you’ve had multiple partners over the years.  Who has been your best and why?

DF: Obviously Manu!!!  We started our pong career together as Die Bierathleten, (That’s “Beer Athlete’s” for you Americans).  We trained, we had fun and better than all that we won all those titles as best of friends.  Thank you for everything Manu!

DF: A terrible moment actually, losing back to back $200 cash games within 10 minutes while playing with a former World Series Champion – Sorry for that by the way, haha – It was my first time competing with the very best in a game and I liked it, even though I failed miserably in those two games! 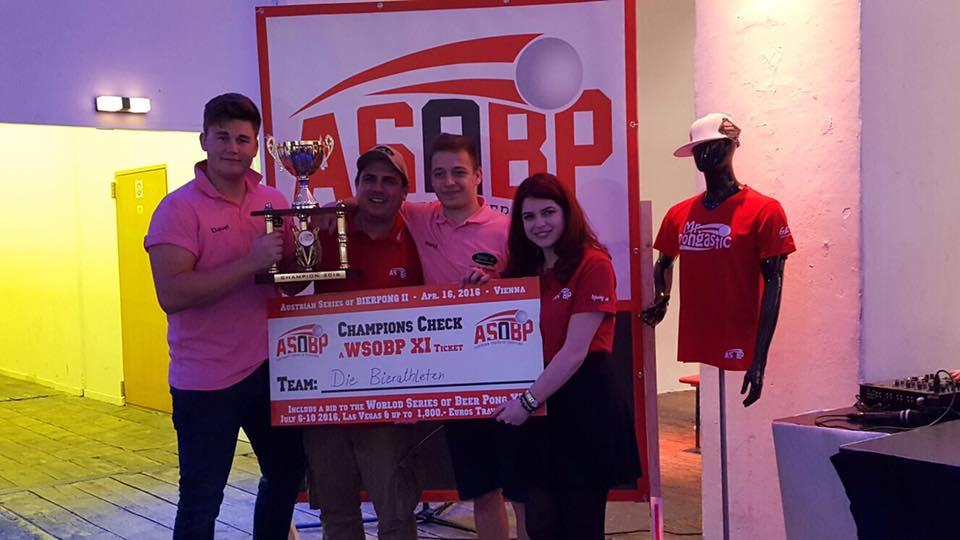 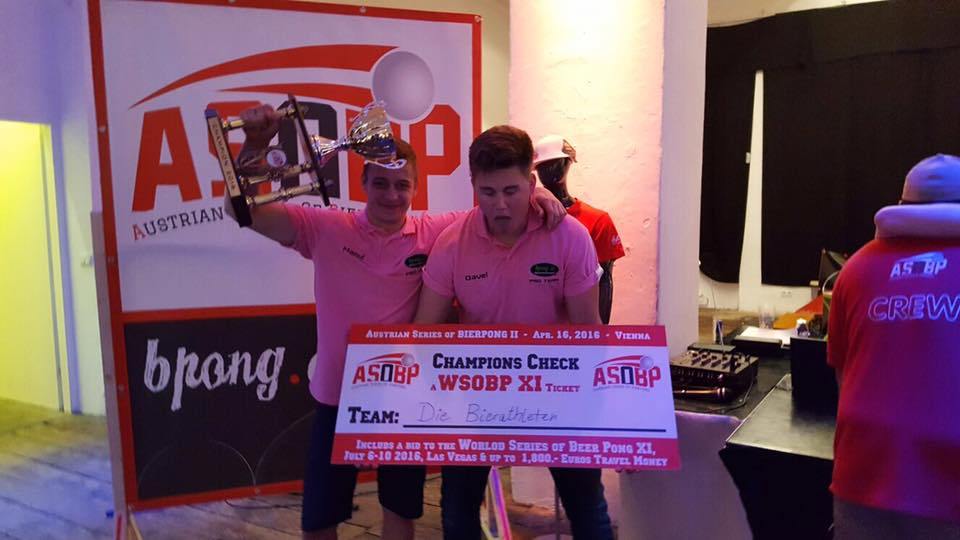 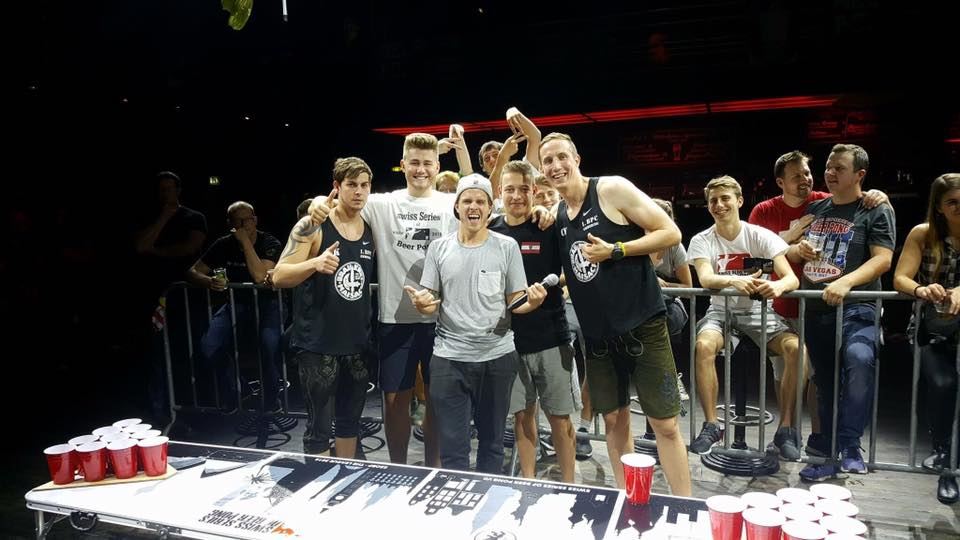 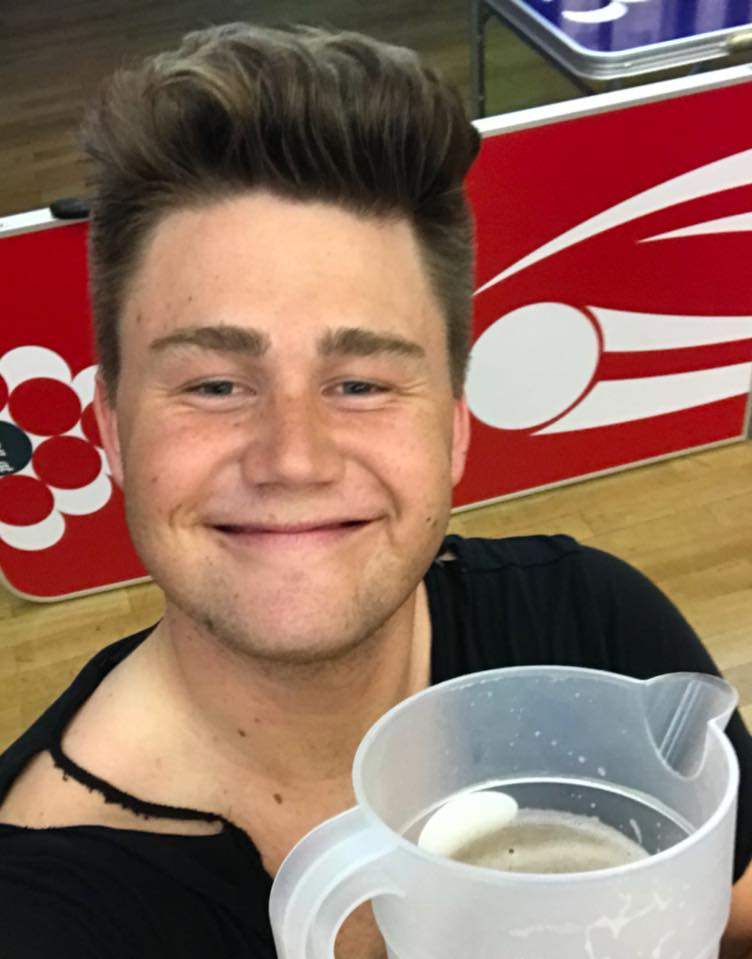 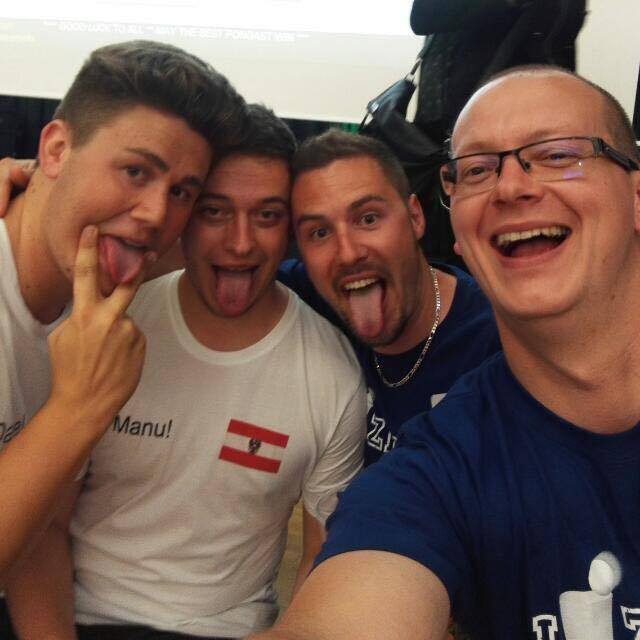 We end things with “Dave!”

PS: Only a few more questions Dave and we’ll let you go!  Americans often wonder what life is like in Europe and the same goes for beer pong.  You’ve had the luxury of living both so what do you think of the professional scene in the United States?

DF: It’s something I’ve seen for a couple years now since the 2017 WSOBP.  I only ever heard about it from friends or different groups in social networks.  After having experienced it now, I think it’s the perfect mixture of competitiveness, playing great pong and making the best out of some days with pong friends.  People in Europe love it, otherwise they wouldn’t copy the outfits, types of shots and moves on the table that all of the Americans do.

PS: That actually leads us into our next question.  Being from Europe, most of your exposure to the American events as been through Youtube videos and Facebook Streams.  Is there a certain player in the USA that you looked up to and/or feel motivates you?

DF: I had to name my favorite USA player initially and I have done that for a reason.  Apart from taking his shot, I learned a lot through talking and playing with Marx.  Besides, he really wants to integrate European Beer Pong with the United States.  We thank you a lot for that!

PS: Final question, you’ve done very well so far and we appreciate your time!  Where do you see yourself in the next five years?  Are you still competing?  Do you believe you’ll be ranked?

DF: That’s tough to answer.  I have put a lot into pong so I hope that I can continue to improve my results within that time frame, especially at the World Series.  Maybe the personal life doesn’t allow that much pong then, but I will always be willing to play and get better.

We appreciate you taking the time reading this sit down with David Feichter, our first professional beer pong player spotlight!  These types of write ups are going to become a normal thing for us.  We’re going to highlight anyone we can from the US to Europe from players to organizers.  If you have someone in mind that you would like to learn more about please feel free to leave us a comment below.  If you’re an organizer who would like to make sure a special player in your community gets some well deserved recognition, feel free to fill out our contact form HERE!